There are plenty of choices when it comes to the 2017 Ford Focus model range. Both sedan and hatchback body styles are available, and engines run the gamut from a frugal 1.0 L turbocharged to a 2.3 L turbocharged that delivers 350 horsepower through a sophisticated AWD system.

Regardless of trim level, all 2017 Ford Focus models incorporate advanced safety technologies like Electronic Stability Control (ESC) and Anti-Lock Brakes (ABS) which constantly monitor road conditions and driver responses and adjust engine power and engage the ABS when required. Ford’s ESC and ABS help give the driver additional confidence on city streets or out on the open road.

For Petrol Heads Only

Recently The Globe & Mail effused about the 2017 Ford Focus RS, writing that it’s “ready, willing, and able to take on virtually any challenge on the asphalt.” The Focus RS features a powerful 2.3 L DOHC turbocharged EcoBoost engine delivering an astonishing 350 horsepower. All that power is put down to the ground through the RS-only 19” wheels via an All-Wheel-Drive System that intelligently distributes power as needed: front to rear and left to right. The AWD system features four different driver-selected power distribution modes including Drift and Track. Stopping duties are handled by 350 mm rotors front and 302 mm rotors rear, the fronts fitted with a pair of Brembo .

Perhaps the most luxurious Ford Focus ever

The most highly-featured models of the 2017 Ford Focus line are the aptly-named Titanium Sedan and Titanium Hatchback, with a “focus” on the Integration of technology. Titanium models feature Ford’s latest Sync 3 system, an integrated in-vehicle communications and entertainment system that facilitates hands-free calling, control of the audio system, and other functions through the use of voice commands. For those seeking comfort, both front bucket seats are leather-trimmed with eight-way power controls on the driver’s seat. For cold Saskatchewan mornings both front seats along with the leather-wrapped steering wheel are heated and heated, power-adjustable side view mirrors are all standard.

The 2017 Ford Focus Titanium models also offer Intelligent Access with Push-Button start and a Remote Start System, so you don’t need to brave an Alberta Clipper just to warm-up your car in the morning. The Titanium Technology Package provides additional safety features including automatic high beam headlight, Lane-Keeping Alert and BLIS Blind Spot with Cross-traffic Alert. Under the hood the powertrain is identical to that in the SEL series; however, an upgrade to four-wheel anti-lock disc brakes is standard equipment.

Striking a Balance between Luxury and Affordability

Right in the middle of the line, the 2017 Ford Focus SEL Sedan and Focus SEL Hatchback, while competitively priced, offer a combination of comfort and convenience. Both Ford SEL models feature the 2.0 L Duratec 20 four-cylinder engine, driving through a six-speed PowerShift automatic with SelectShift. Wheels are upgraded to attractive 17-inch machined wheels with black coloured pockets. The SEL models feature a convenient Dual-Zone Electronic Automatic Temperature Control to so that driver and passenger remain comfortable winter or summer, even if they prefer different temperatures. Both SEL models are equipped with Ford’s Sync 3 system with a larger eight-inch touch screen. A Sony audio system with 10 speakers and the capability of receiving HD radio and Sirius XM comes standard in the SEL. A Winter Package is available and includes heated exterior mirrors, all-weather floor mats, heated front seats, and a leather-wrapped heated, three point steering wheel, perfect for a cold winter Saskatoon morning.

Sedan or Hatchback, the Choice is yours with the Focus SE

The most affordable 2017 Ford Focus models available in a hatchback configuration is the Focus SE Hatchback. There is also a Ford SE Sedan available, powered by a clever 1.0 L EcoBoost three-cylinder turbocharged engine producing 123 horsepower, along with exceptional fuel economy of L/100Km City/Hwy of 7.9/5.9.* In addition, the 2.0 L Duratec 20 engine is optional in the Sedan. The SE Hatchback is available only with the 2.0 L Duratec 20 engine. A six-speed manual gearbox is standard on the SE Sedan, and two different automatic transmissions available as options. The SE Hatchback is available only with the six-speed PowerShift automatic. The audio system is upgraded over the S Sedan, with Sync standard, along with additional standard features and available options, such as the Winter Package that seems to have been designed for Saskatonians.

The base model 2017 Ford Focus S Sedan is anything but basic. The Focus S Sedan features Ford’s proven 2.0 L DOHC four cylinder Duratec 20 engine that can be fueled on either gasoline or E85. The Twin Independent Variable Camshaft Timing (Ti-VCT) in the Duratec 20 improves power and torque, particularly at low engine speeds, as well as improves fuel economy and reduces emissions. The standard transmission is a five-speed manual with an optional six-speed PowerShift Automatic Transmission.

The interior is well-equipped with front bucket seats that feature six-way manual driver and four-way manual passenger adjustments, along with an AM/FM radio combined with a single-disc CD player with MP3 capability. Audio is delivered via four speakers with automatic volume control which adjusts audio levels based on vehicle speed. The Focus S Sedan also features Enhanced Voice Recognition Communication and Entertainment System with 4.2-inch LCD Display in the of the dashboard with input jack for Smartphone integration and two USB Smart Charging ports.

The Ford Focus That You Plug in the Wall

For those of you electrically-inclined, Ford offers a 2017 Ford Focus Electric with a range of up to 185 km. Available only in the hatchback body configuration the 2017 Ford Focus Electric is powered by a 107 kW electric motor through a single-speed automatic transmission. Charging is via J1772 CCS (Combo Connector System) Charge Port capable of charging on 120V, 240V and Direct Current (DC Fast Charge) to top-up the 33.5kWh liquid-cooled Lithium - Ion battery. Included is a 120V convenience charge cord. The charge port features a LED state-of-charge bar that illuminates when the cord is plugged in indicating that it’s connected and charging. When all four bars are solidly lit, the charging process is complete. Interior features of the Focus Electric are similar, but not identical, to the Focus SEL hatchback.

No matter from where you get your own personal voltage – a Ford Focus RS that jolts you with 350 horsepower, the tingle in your wallet from passing yet another gas station in your fuel-sipping 1.0 L Focus SE, or commanding 107 kW of power in your Focus Electric, come down to Merlin Ford in Saskatoon, SK to check the full line of 2017 Ford Focus models. 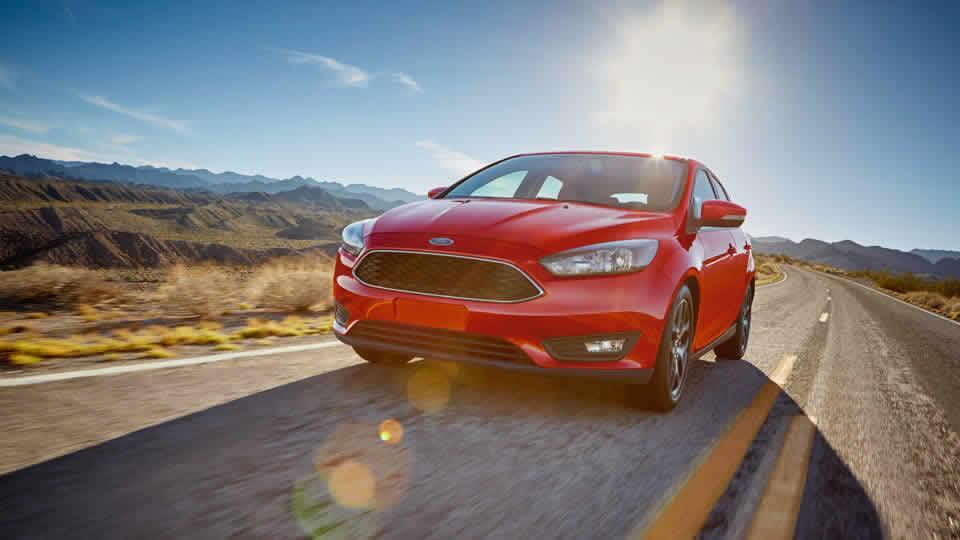